Title: A Monster Calls Movie
Director: J.A. Bayona
Stars: Patrick Ness (screenplay), Patrick Ness (based upon the novel written by)
Writer: Lewis MacDougall, Sigourney Weaver, Felicity Jones
Plot: Conor O’Malley (Lewis MacDougall) is a boy who at 13 has had to take on many responsibilities. After the separation of its parents and the serious illness that suffers its mother (Felicity Jones), has been forced to take the reins of its home. In addition, due to school bullying at school, she has created a fantasy world full of fairies, elves and other wonderful creatures, allowing her to escape from her routine and overcome her fears. Because even in his own family environment, his inventiveness has to face even the vision of his cool and calculating grandmother (Sigourney Weaver). Through the window of his room, the young man can see a yew tree, an old tree that has been standing for thousands of years. A few minutes after midnight, Conor wakes up and meets a monster (Liam Neeson) through the glass. 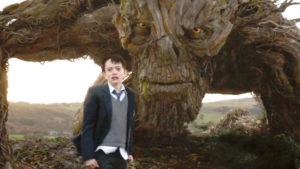